Change Your Pain by Changing Your Brain with Chiropractic Care 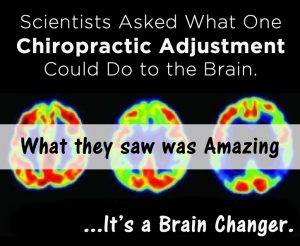 A study has revealed the impact of one single chiropractic adjustment on the human nervous system.  Chiropractic care has been thought of as a treatment for pain related disorders only. However, new research is beginning to shed light as to why it’s so beneficial when someone hurts. Chiropractic care is all about removing interference within the body. Anything that interferes with your brains ability to maintain optimal function will result in disease.

Recently, scientists were able to take a radioactive analogue of glucose as a marker to measure brain glucose consumption as it would indicate brain metabolic activity after a chiropractic adjustment. Their findings were AMAZING!

8 PhD’s and 1 Chiropractor took several participants and scanned their brains Before and After a Chiropractic Adjustment. What they found next was astonishing!

This means that Chiropractic adjustments help to

What are the implications of this study?

“The latest study suggests that the changes that we do see in the brain when we adjust the spine do occur in the prefrontal cortex. That part of the brain is like the conductor,” said Dr. Haavik.

The implications of this finding are discussed further by Dr. Haavik, below:

“An effect on the function of the prefrontal cortex could explain many previous research results, such as improvements in sensor motor function relevant to falls-prevention; better joint-position sense in both the upper limb and the lower limb; improved muscle strength in lower limb muscles; better pelvic floor control; and better ability to carry out mental rotation of objects.”

Chiropractors often observe a broad spectrum of changes in people under chiropractic care. These changes may include patients saying they feel better or focus better, as well as noticing improvements in movement and coordination. In order to understand why this might be, we need to better understand the brain’s ability to perceive, and respond to, the world around us. As Haavik explains:

“Being able to accurately perceive the world around you is a vital skill we need all day every day. To recognize some objects you may need to mentally rotate them. For example to recognize the letter p versus b if they were not upright you would need to rotate them in your mind to figure out which letter it was. We all do mentally rotate shapes and objects we see, but we may not often think about that we do it, or how important this is in our daily life.”

“This is solid scientific evidence that adjusting the spine changes the way the prefrontal cortex of the brain is processing information from the arm. It demonstrates we change the way the brain works and shows that spinal function impacts brain function. One of the most interesting things about the changes we observed was that the prefrontal cortex is responsible for behaviour, goal directed tasks, decision making, memory and attention, intelligence, processing of pain and emotional response to it, autonomic function, motor control, eye movements and spatial awareness.”

What does this mean for you?

The question to ask now is this: what might this mean for chiropractic and for health in general? If the research is correct in suggesting adjustments improve prefrontal cortex activity, what role might chiropractic play in improving the functions controlled by this part of the brain? Many chiropractors are sharing their thoughts on this study, like this example.

Further research is needed to explore this area and to answer the questions posed by this study.

“Look to the nervous system as the key to maximum health.”